Equalization is the adjustment of bands of frequencies in an audio signal to change the tone of the sound it produces.

A pure single frequency would be a perfect sine wave but sounds in nature and even artificially synthesized sounds are often very complex and are made up of many overtones and harmonics. This means that each vibration (or even mix of vibrations) is made up of many different frequencies layered to make a single sound.

In theory, a human ear can detect sounds between 20Hz and 20,000Hz (20kHz). This is known as the audio SPECTRUM, which is a metaphor of the visible light spectrum that human eyes can see.

The term 'equalization' comes from the original purpose of its function, which was to compensate for irregularities in the frequency response of early audio equipment. Some bands of frequencies needed to be boosted where they came out weakest or cut where the audio circuitry produced them most strongly. This process can also be applied to compensate for (or equalize) the tonal response of a room or open space, where some frequencies develop more strongly than others.

However, equalization is often used to deliberately change the tone of a sound to give it a specific character and not just to compensate for equipment or environment. There are many different types of EQ, so here below, we will look at the most popular and attempt to demystify one of the most important tools in a sound engineer’s arsenal.

Most people are familiar with a basic TONE control which may be found on a radio tuner or home stereo, which normally just rolls off the upper frequencies when it is turned down, resulting in a more muffled sound. This is the most basic type of equalization.

Any circuit that separates a specific range of frequencies for adjustment is known as a FILTER, since it selectively 'filters' out any frequencies that it needs to boost or cut. 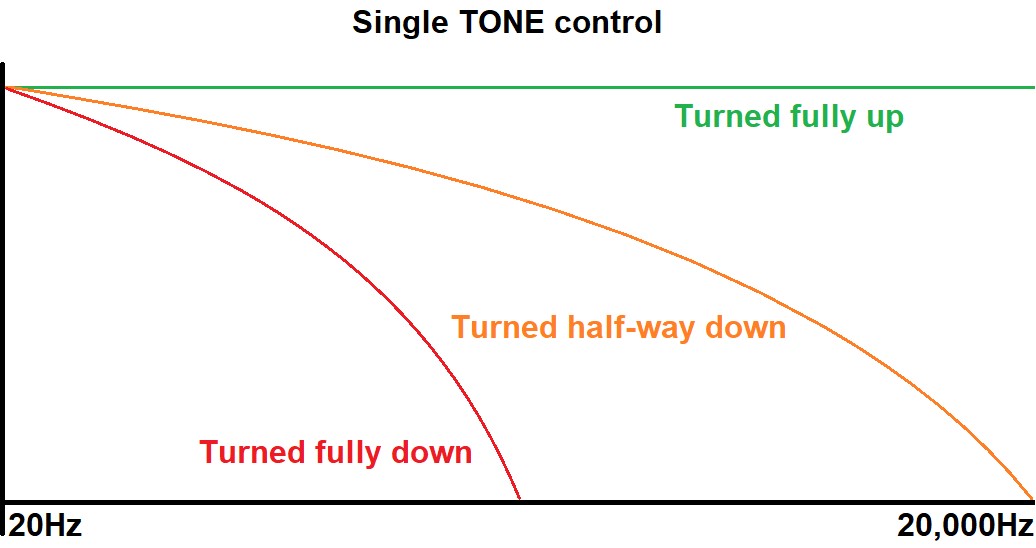 Each of the BASS and TREBLE filters has an upper or lower slope to cut off the frequencies that it does not control. This type of filter is called a SHELVING filter, because the shape is like a shelf, with a straight line edged by a slope. 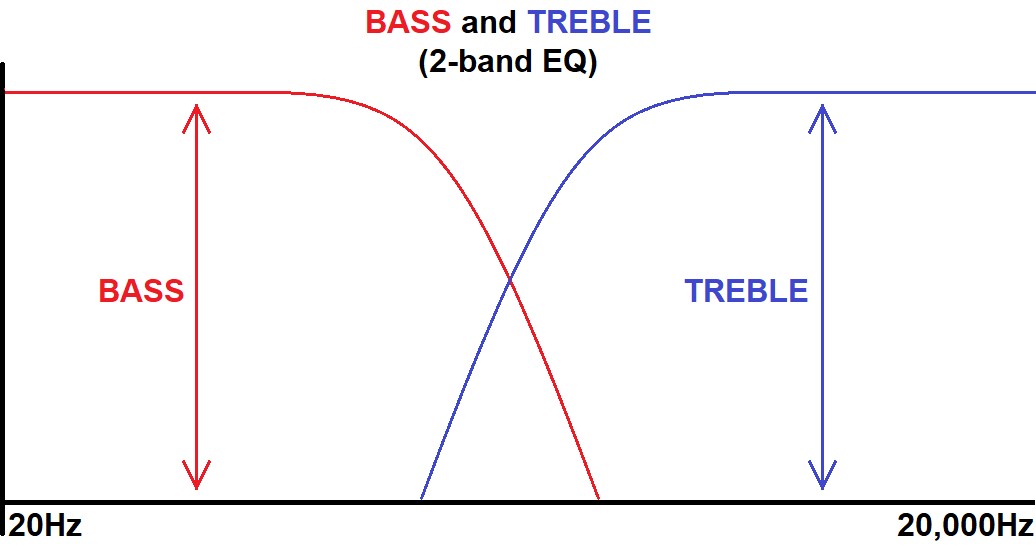 Taking this concept further, it is possible to control a separate band of frequencies between the LOW and HIGH frequencies. This is especially useful, since the MIDDLE (or MID) frequency band is the most prominent audible sound to human ears.

In this type of equalizer, there are 3 separate controls for BASS, MIDDLE and TREBLE (or Low, Mid & High) designating this as a 3-band EQ.

The MIDDLE control has slopes on both sides of its centre frequency (sometimes called 'cut-off' frequency) so that it is not affecting the lower or upper frequencies. This type of filter is known as a BAND-PASS filter, since it only allows a specific band of frequencies through to be adjusted. 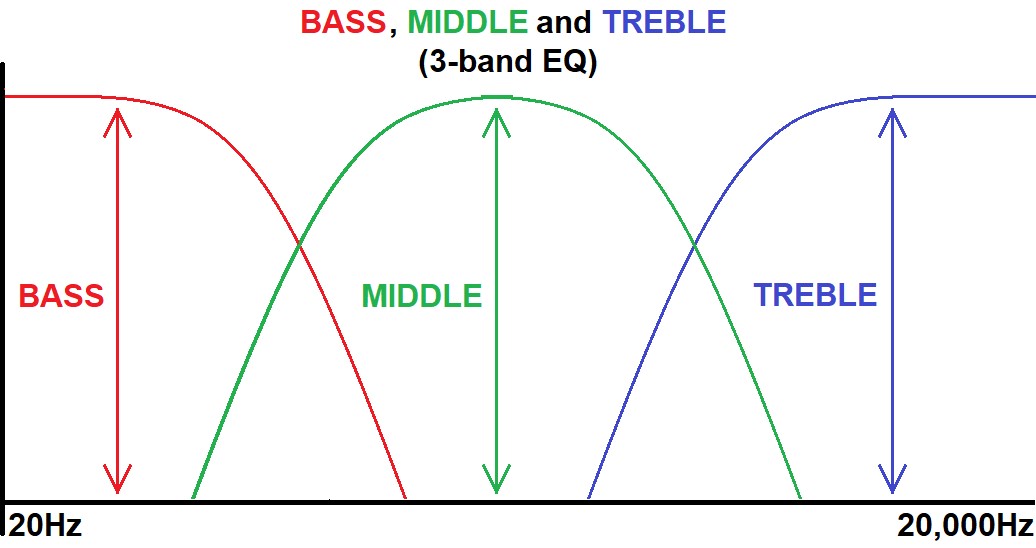 For even more detailed control, the number of frequency bands can be increased so that many filters are adjusting narrower sections of the audio spectrum. 5-band, 7-band and 15-band EQs are not uncommon and the industry standard is a 31-band, in which each band covers one third of a musical octave.

On most equalizers with many frequency bands, the controls are usually arranged as a row of vertical faders. This linear arrangement makes it easy to see which bands are boosted or cut, since each control appears like a point on a graph. For this reason, this type of EQ is called a GRAPHIC EQUALIZER.

There are still different types of equalizer, which are less complicated but still very versatile. A 3-band EQ may have limitations but as mentioned above, the middle frequencies are very dominant in the audible spectrum and manipulating the mid-range can have a dramatic effect on the overall sound. To address this, some 3-band EQ sections are equipped with a variable SWEPT MID control.

This is a MID control which can vary its centre frequency, so that it can adjust LOW-MID frequencies, MID-HIGH frequencies or any point between, giving a different character to the mid-range. Likewise, a 4-band EQ can have 1 or 2 swept MID controls for more flexible mid-range manipulation. 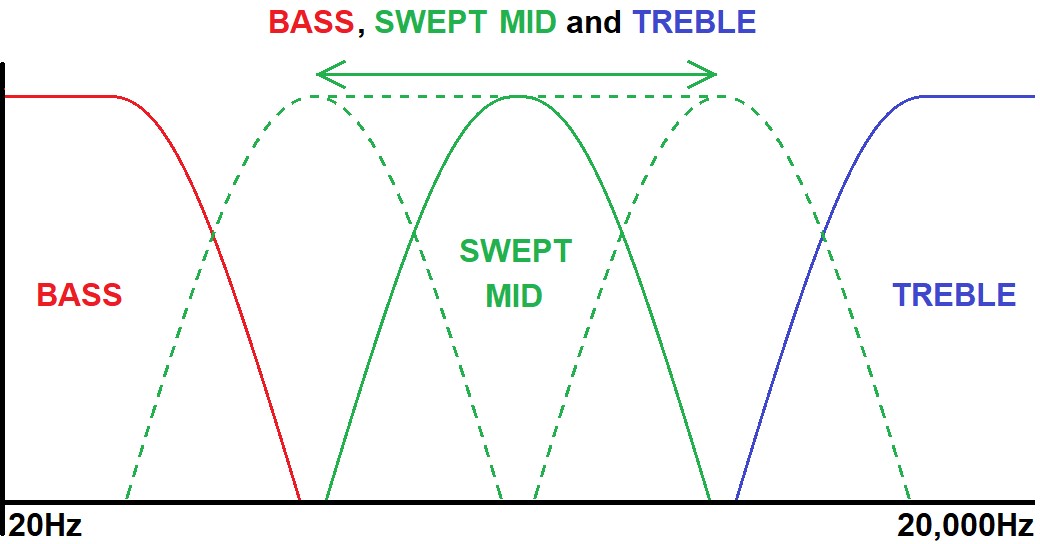 The most variable type of filter is a band-pass filter which can not only change its centre frequency but can also change its BANDWIDTH. The bandwidth is how wide the range of frequencies the filter can allow through and is sometimes called RESONANCE or symbolised by the letter Q.

This filter would have control over all 3 parameters – Boost/Cut, Centre Frequency and Bandwidth – and is known as a PARAMETRIC EQUALIZER. This type of EQ can be used to operate on the MID-range along with BASS and TREBLE controls or may be used alone as a tone shaping tool. 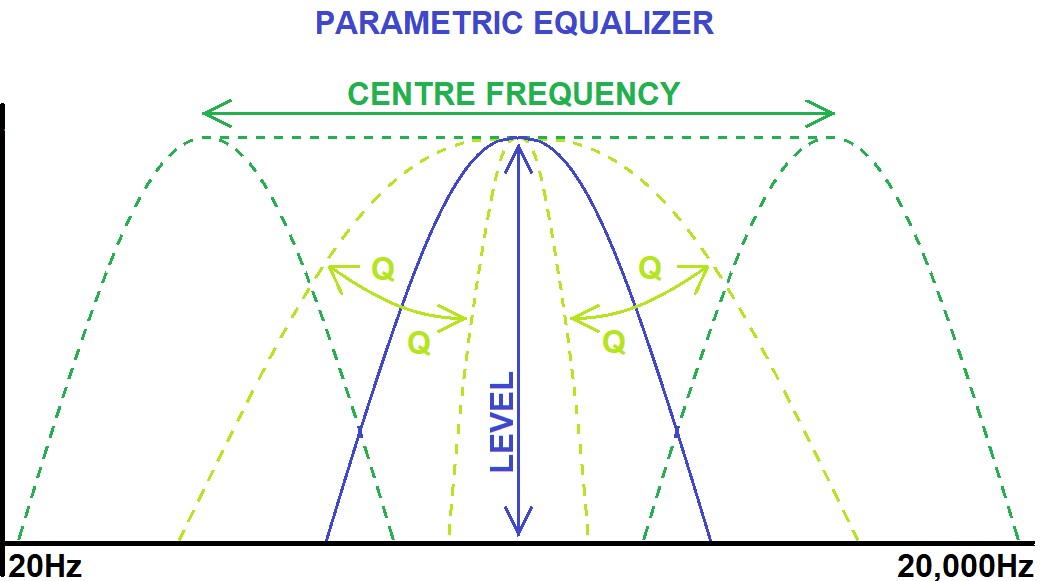 Other types of EQ can include fixed LOW PASS, BAND PASS or HIGH PASS filters (LPF, BPF or HPF), which apply a pre-set amount of boost or cut of a specific band of frequencies at the push of a button. This can be useful for reducing low frequency handling noise in microphones (HPF), emulating the warmth of older audio equipment (LPF) or even boosting a particular section of the middle frequencies to give prominence to spoken word passages (BPF).

These switched pre-set tone controls are sometimes labelled as PRE-SHAPE and are often in addition to other EQ. Another additional type of EQ is a CONTOUR control, which is a single control that changes the MID emphasis, changing both the centre frequency and boost or cut in a single sweep.

A PASSIVE CROSSOVER is a large and basic type of filter that is normally located inside the speaker cabinet and has no power source of its own – hence the name 'PASSIVE'.

EQ has many applications in both live sound production and recording. To see what is happening with the overall distribution of frequencies in an audio signal, a sound engineer might use a SPECTRUM ANALYSER, which is similar to a GRAPHIC EQUALIZER but with individual visual meters instead of boost/cut faders. This gives a visual representation of the signal levels per band of frequencies and helps to show which might benefit from boosting or cutting to give a full and balanced sound.

GRAPHIC EQUALIZERS in particular can be useful in live sound situations for dealing with problem frequencies. There may be certain specific frequencies that are prone to generate feedback in stage microphones either due to their position in relation to the loudspeakers or from special characteristics of the room itself. Narrow band equalizers (e.g. 31-band) have enough accuracy to attenuate problem frequencies without disrupting the whole audio picture. FEEDBACK ELIMINATORS can perform this task automatically and are able to do so thanks to the development of digital filters, which are agile enough to surgically remove a problem frequency at the point that it detects the audio signature of feedback.

Digital filters are also used in DIGITAL SPEAKER MANAGEMENT SYSTEMS, which are sophisticated active crossovers that can manipulate frequencies and volume dynamics with pinpoint accuracy, tailored to match the characteristics of each loudspeaker cabinet for maximum efficiency.

In recording, EQ is a useful way to separate instruments and vocals. More audible 'space' can be made for a lead vocal by removing prominent frequencies in mid-focussed instruments such as pianos or guitars. Likewise, keeping only the bass frequencies from a bass drum avoids the overtones from mixing with the mid-range of other drums, keeping the percussion track clear and uncluttered.

There are many other EQ techniques to be used in sound systems, from small PA setups to large concert rigs, but all rely on the same criterion and experimentation and intuition are always recommended.